France, SPC to scale up health security in the Pacific 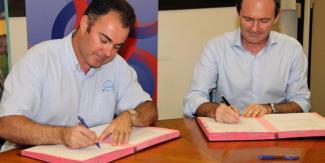 Speaking at the signing ceremony, Mr. Diver expressed his gratitude to the French Government. “By boosting its financial support to PPHSN, France makes a massive contribution to health security in the Pacific. This funding also contributes to the strengthening of France-CPS relations in view of the multi-year partnership currently being prepared and which is expected to be signed during the first half of this year”, he said.

Over the past two decades, Pacific Island countries and territories, together with PPHSN partners, have put a lot of work to reduce the risks and protect Pacific people from epidemic diseases, such as dengue fever. However, there is still lots to be done, notably in the face of growing public health threats arising out of post-disaster situations, which are in turn attributed to climate change.

SPC, through its Public Health Division, will work in close collaboration with all Pacific countries and PPHSN partners to implement activities in three key areas: epidemiology, laboratory, outbreak surveillance and response at the national and provincial level; entomology and vector control; and new risks such as antimicrobial resistance.

New partnerships will be established to expand the services of the network. The “One Health” concept, gathering public health, environment and animal health experts, will be used in framing surveillance and epidemiologic interventions against climate-sensitive vector-borne diseases like dengue fever and Zika and zoonotic diseases like leptospirosis. Health and laboratory experts from French health-related institutions working in the Pacific, including the Institut Pasteur in New Caledonia and the Institut Louis Malardé in French Polynesia, will contribute to capacity-building activities alongside SPC and many other PPHSN partners.

Over its 21 years of existence, PPHSN has received continuing support from the French government. Renewed AFD support will benefit the 22 Pacific island countries and territories in meeting health-related Sustainable Development Goals (SDGs) and develop core capacities to meet their commitments pursuant to WHO International Health Regulations (IHR2005) on limiting the spread of health risks globally.

The Pacific Community (SPC) is the principal scientific and technical organisation in the Pacific. Established in 1947, it works for the development and advancement of the Pacific peoples. For more information on PPHSN, please visit our website.