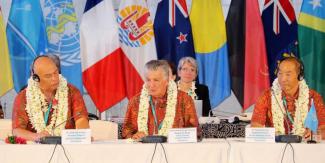 The health impacts of a changing climate were a focus of last week’s 13th Pacific Health Ministers Meeting, with ministers acknowledging the ‘climate crisis’, and endorsing a roadmap to address climate-related threats to safe drinking water, sufficient food, resilient health infrastructure, and secure shelter in the Pacific.

Highlighting the urgency, in addressing the meeting, Dr Tedros said:

“The world is facing a climate crisis, and the Pacific is on the front line. I believe strongly that to elicit the action we need, we must reframe climate change as a health issue...The effects of climate change on human health are much more immediate, including death and disease caused by extreme weather events, heat stress, waterborne and foodborne diseases, malnutrition and more.”

Ministers endorsed a number of actions to address these priorities. French Polynesia’s Minister of Health and Chair of the meeting, Dr Jacques Raynal, noted some of the outcomes:

“In tackling the NCD crisis, participants agreed to develop or maintain national NCD task forces involving sectors beyond health, and incorporate action to combat childhood obesity into their national NCD plans…Ministers also acknowledged the dire situation in regards to water, sanitation and hygiene (WASH) in the Pacific, the need to understand more about the challenges; and committed to develop a Pacific strategy to address this.”

Additionally, health security - an essential requirement in one of the most disaster-prone regions - was also a key focus, with ministers committing to develop and fund national health security action plans to fill gaps in emergency preparedness and response capacities, and sustain gains already made.

Dr Tukuitonga, SPC Director-General, highlighted the multitude of challenges the Pacific region faces, such as climate change and the NCD crisis; as well as a collective commitment to action. “Over the past few years, we have seen an increasing desire from countries to take leadership and ownership of the work to address health through strengthening the regional health architecture.”

“In the face of these challenges, a ‘business as usual’ approach will not be good enough, said WHO’s Dr Kasai, “addressing the challenges we face will require greater creativity, more innovation and stronger partnerships than ever before.”

The PHMM was organized and hosted by the Government of French Polynesia, with support from the Pacific Community (SPC) and the World Health Organization (WHO).

Background information:
The Pacific Health Ministers Meeting (PHMM) was first convened in 1995 in response to the rapidly changing social and economic conditions affecting the quality of life and health in Pacific island countries and areas (PICs).
A key aspect of the inaugural PHMM was the establishment of the ‘Healthy Islands’ vision, which serves as a unifying theme for health protection and health promotion in the Pacific. Envisioned in 1995, the vision has laid the foundation for all subsequent PHMM, with meetings providing an opportunity to report on the progress of the Healthy Islands Monitoring Framework.
Twelve biennial meetings of PIC Ministers of Health have occurred since 1995, with the last meeting hosted by the Cook Islands in Rarotonga from 28-30 August 2017, where PIC governments affirmed their commitment to the Healthy Islands vision.
This is the first PHMM to be hosted by a Francophone government.
Ministers of Health or senior officials from the following countries attended the meeting: Australia, Cook Islands, Fiji, French Polynesia, Kiribati, Marshall Islands, the Federated States of Micronesia, Nauru, New Caledonia, New Zealand, Niue, Papua New Guinea, the Commonwealth of the Northern Mariana Islands, Samoa, Solomon Islands, Tokelau, Tonga, Tuvalu, and Vanuatu.