See what youth can do

Have you ever seen these murals? If you are from Suva (Fiji), Nuku’alofa (Tonga), Port-Vila (Vanuatu) or Mata Utu (Wallis and Futuna), you might surely have noticed them.

The Pacific Youth have a message for you.

They want you to be concerned about the threats of non-communicable diseases (NCDs).

Through the initiative of the Wake up! Project, implemented by the Pacific Community (SPC) Public Health Division and funded by the Pacific French Funds and the Government of Australia (DFAT), 13 young people from the Pacific Island countries and territories have created street art messages to address NCDs in their communities.

Do you know what NCDs are?
NCDs include diabetes, cardiovascular disease, chronic respiratory disease and cancer, and are a major health, social and economic development challenge for Pacific Island countries and territories. These diseases, which are highly prevalent in the region, drain government resources and have a negative impact on quality of life. Typically observed in adults, NCDs are now being increasingly diagnosed in young people. Tobacco, harmful use of alcohol, poor diets (such as diets rich in sugar, salt, fats, processed foods, and low in fruit and vegetables) combined with lack of physical exercise, are the leading risk factors for NCDs.

First of all, what is the Wake Up project?

In Wallis and Futuna, three young Wallisian have taken part to the project involving street art in order to promote NCDs prevention in their home country.

With more than 15% of Wallis and Futuna population suffering from diabetes, prevention on NCDs is crucial. That is why, Toki, Lyka and Esitokia were helped by Sham, a professional street art artist, to design this artwork on the Sia Hospital building in Mata'utu.

The group have chosen to diffuse their message by using as much as possible the culture of their islands: the tapa.

“We have tried to design a mural like a big piece of tapa with traditional Wallisian visuals with a lot of colors. Inside all of the big circles, we have added key words to invite the population to adopt good practice so they stay healthy. We have mixed both vernacular and French languages to make most of the population feel concerned. People reacted immediatly. A lot of of them told us they want to turn away from their bad habits.”

“Art is what encourage me to participate in the Wake Up project. I am a tattoo artist and I like to draw. In addition, it is necessary to disseminate these strong messages to the population to ensure they are taking care of their health. Wallisians smoke a lot and drink more and more alcohol, which is dangerous for health,” said Toki. In Fiji, Maleina, Leilani, Raijieli, Peni, Lisi and Apisai, a group of young people from Suva, joint the project to raise awareness in their country. A few months after the three-day training, they painted several murals in the capital city, including a heart, located on a public wall next to a well-known fast-food at Ratu Sukuna Park. Beside it, on the other wall, they painted a man in the canoe with fruits. They also decided to paint two other pieces of art on the wall of the Suva Olympic pool area: one dancer and animated vegetables with the slogan “eat less from the box, eat more from the ground”.

The project was a fun and eye opening experience as I got to really get involved in Graffiti art, something I never thought I would do and also creating awareness for myself and for others on NCDs.

The piece of art we did symbolises the good and bad attributes that causes and prevents NCDs. The heart that beats to keep us alive. But if we do not care of it and consume harmful intakes, it begins to rot and die out whereas healthier consumption means a heart leading to a longer life.

We also did one where we used dance as a fun form of exercise. Not many people enjoy going to the gym. Instead find something more interesting like dance where you have fun and keep fit at the same time. How I like to say "stay fit and dance NCDs away"

“I hope people see these murals and are inspired to live a healthier lifestyle. Being part of this project led me to a healthier way of living”, said Maleina. 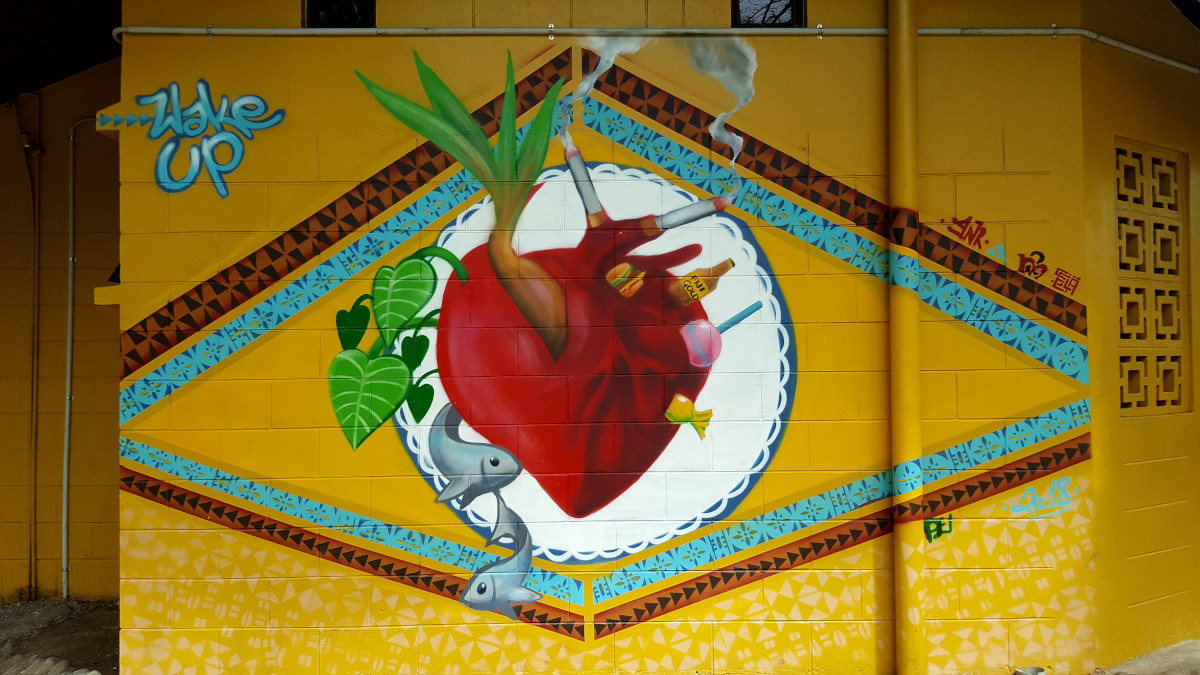 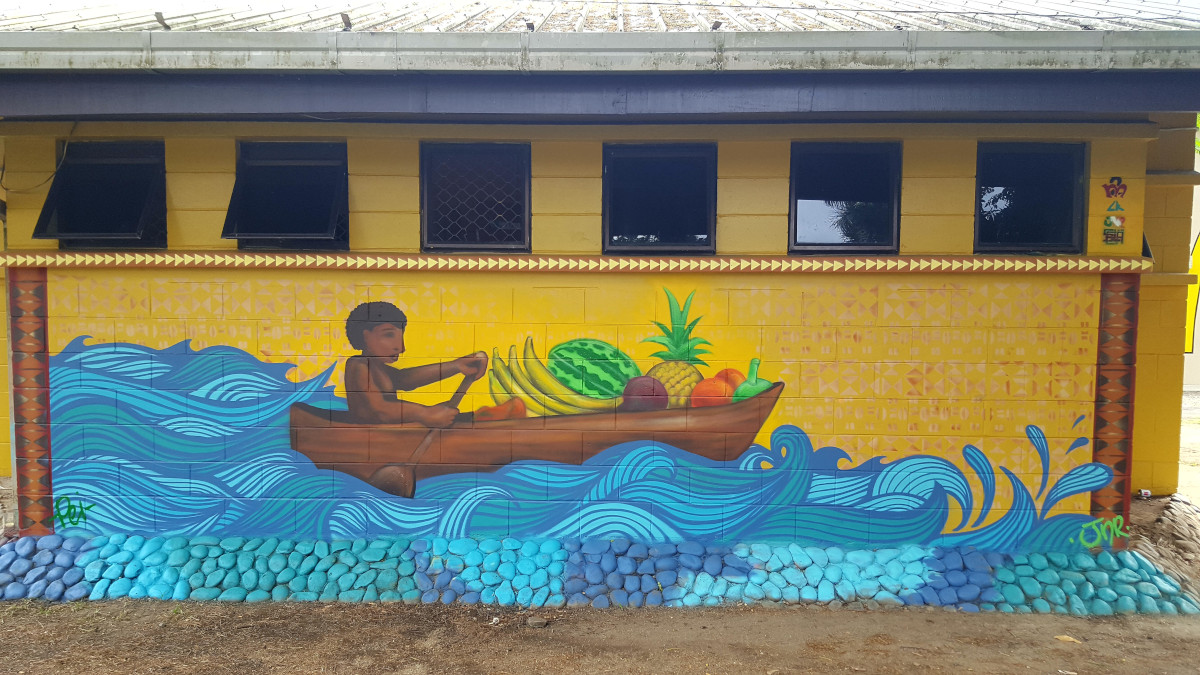 Tonga's team have painted mural on a big wall, opposite a middle school, right next to the Main Street in Nukualofa.

We have asked Taniela, the young Tongan artist, to explain his artwork and his message for his pairs.

The name of my mural is “FREEDOM IS A CHOICE”

On the first wall, the Tiki represents our people in the Pacific islands. Both sides are different: the healthy and unhealthy side. The colourful side is the healthy one with natural healthy food. The background is dark because we can choose to overcome our cravings of unhealthy things. On the other side, the background is red because red represents danger, and all the unhealthy things for our bodies are on it in the grey scale patterns. The Sharkarette (shark + cigarette) shows how dangerous cigarettes are to our bodies. The  patterns are going in to the Tiki’s mouth, to show that everyone can choose to become a healthy person.

The second wall is the heart. The heart is still clean and healthy. The patterns outside the heart that looks like Tapeworms, represents all the bad things that could go into our hearts. They are just waiting for the person to let them in; it is up to us to choose what to let in.

“I really hope that the people in my community would not just like the appearance of it but also receive the messages that it is telling loud and clear. I also hope that it will always remind the youth every time they walk by the wall, our youth is the future, if we teach them right, they will pass it on to the next generation, and that is what I call ‘Live happily ever after’,” said Taniela. 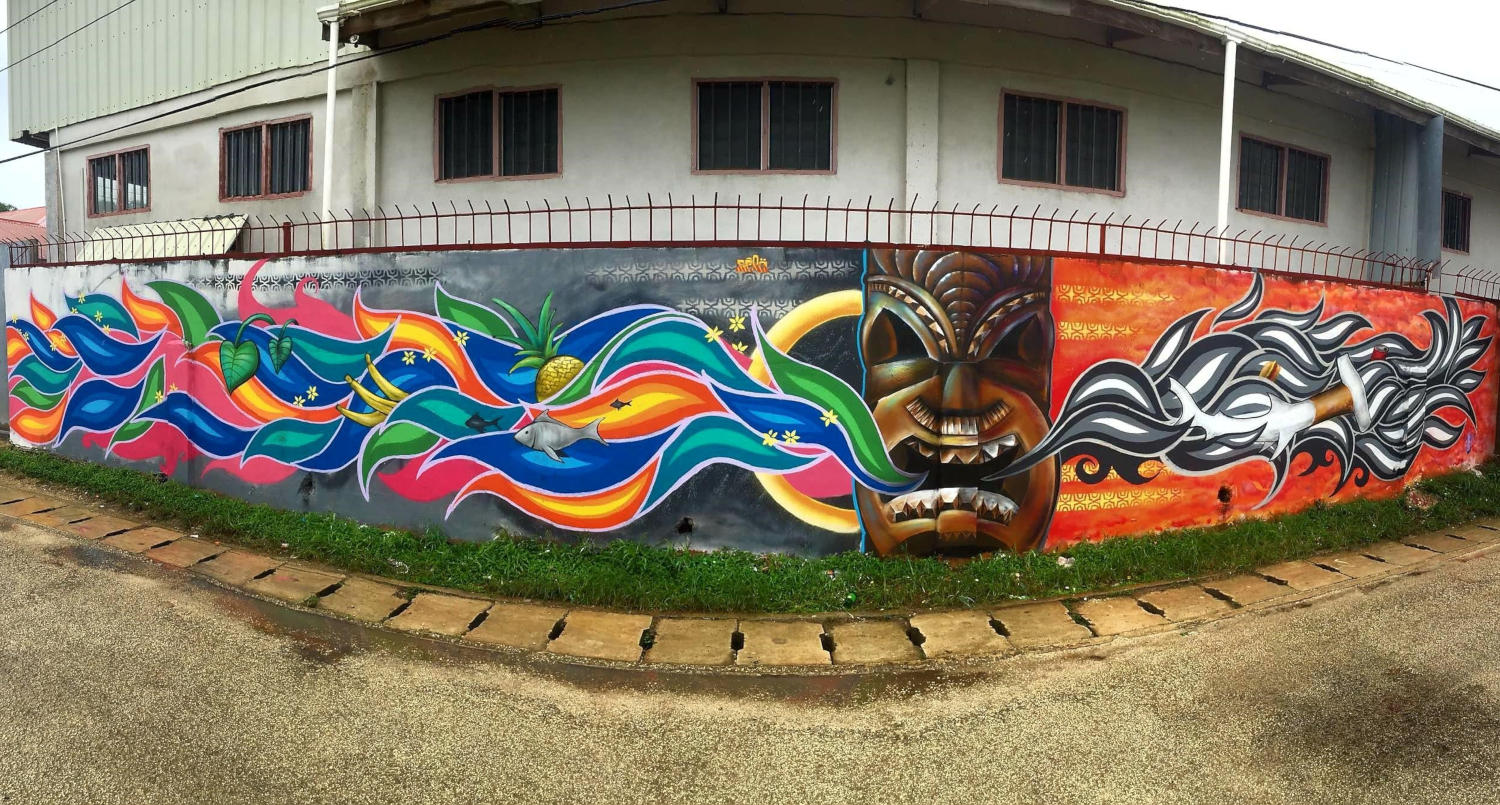 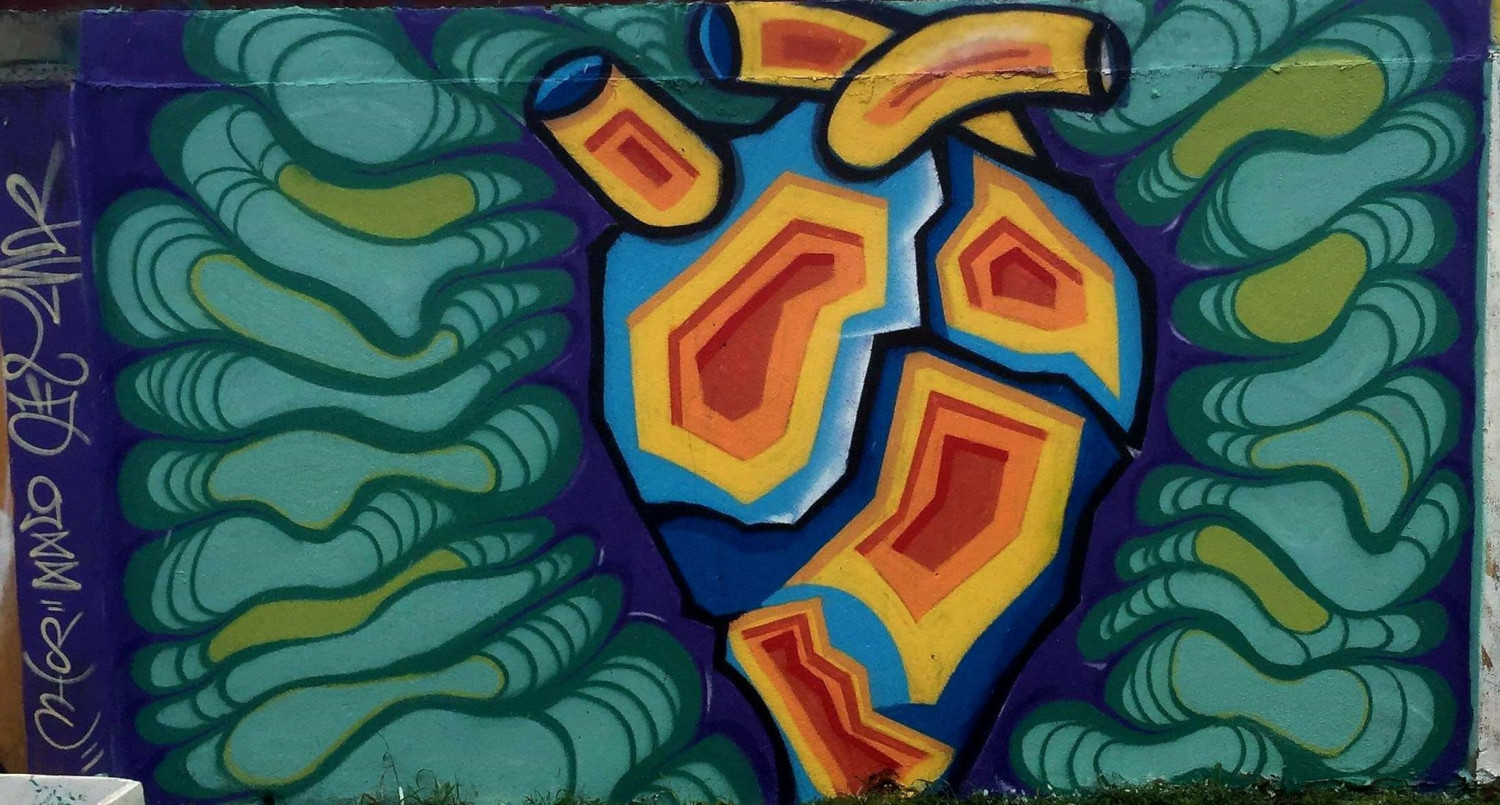 In Vanuatu, youth part of Wan Smol Bag youth center in Port-Vila, a non-profit organization, applied to the SPC Project. Robea supervised the team that included three boys: Robsen, Ben and Ronaldo. When they heard about the project, they immediately wanted to learn graffiti techniques with professional artists and learn how to communicate with street art to promote health.

A few month ago, the team has been help by Raphaël Sela, a professional street art artist from New Caledonia, to design their murals. They have chosen to paint it on the old Pompidou hospital building located in the main street of the capital city.

“The wake up project is a great initiative led by SPC and it has helped us, Pacific island youths, to come out and show our skills promoting the message about NCDs. To me, it has been a wonderful experience. I didn’t know much about NCDs and the causes but I learnt much about it when I participated.”

“Our mural here in Port-Vila has two sides. The murals were created to target the youth group, through the colors and the design. One sad sick emoji with the causes of NCD designed around it pointing to the healthier way of living. And the other mural is a healthy island of fruits and vegetables with a happy family waking up with the sun.”

“We hope the design is clear and it speaks for itself. We heard many positive comments about the mural, that the message and the art was good”, added Robea. 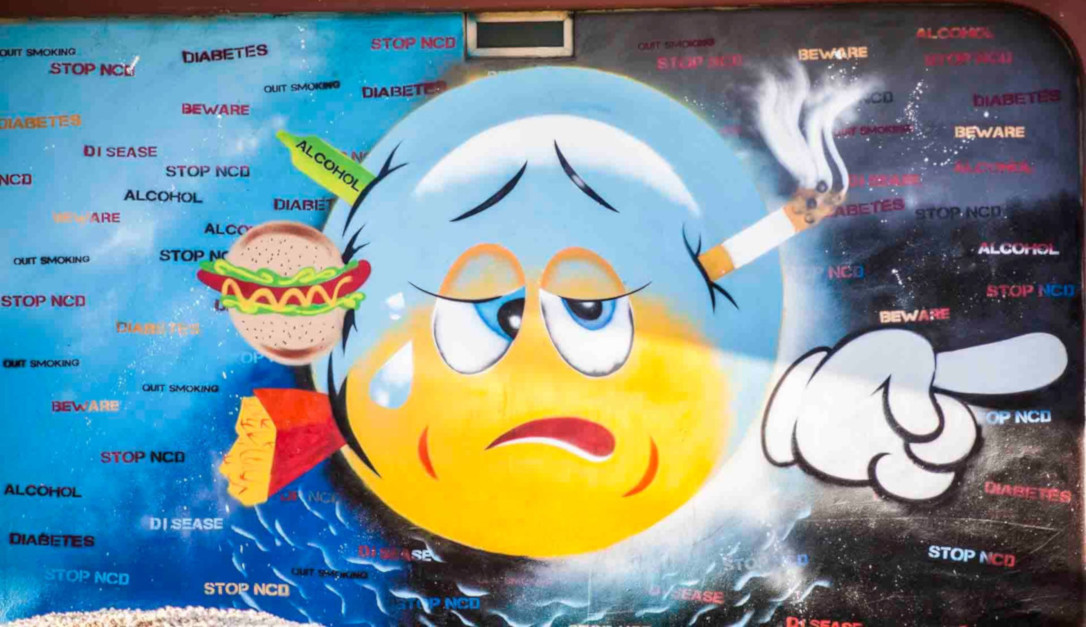 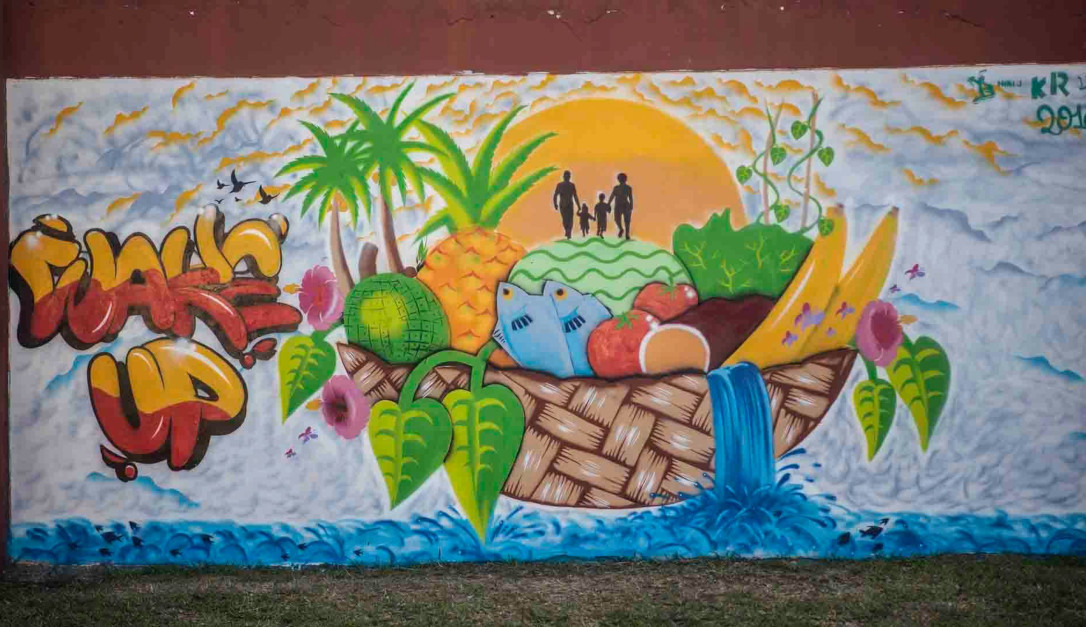 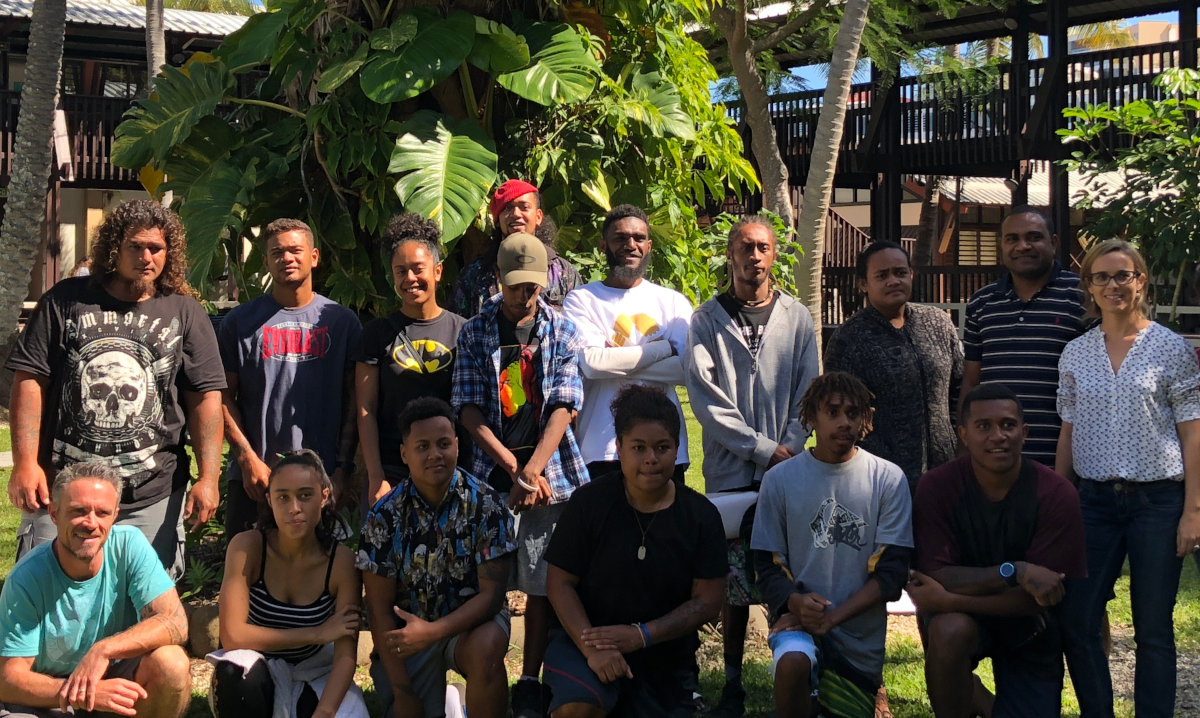